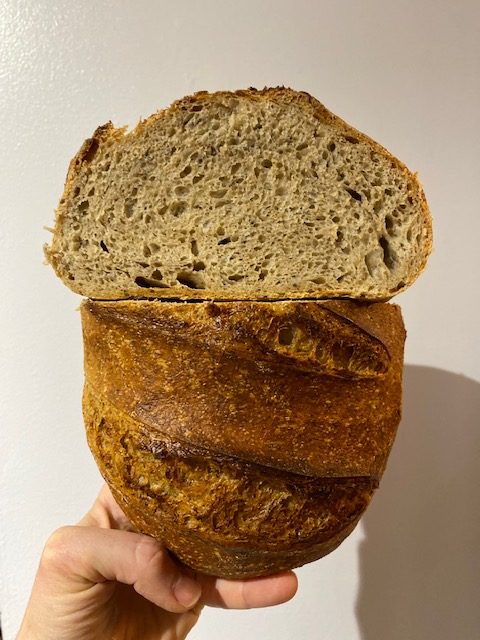 I know what you might be thinking when you hear rye – dense, dark, German style bread like our 100% rye. The New York Deli Sourdough Rye is nothing like that. It got its name from the numerous Jewish delis in the Lower East Side in New York (think When Harry Met Sally and ‘I’ll have what she’s having!’). Those delis sprung up with the arrivals of Jewish refugees from Germany, Poland and Russia where baking with rye and “bread spice” (a combination of caraway, coriander, anise and fennel seeds) is common.

This particular loaf is made with a mix of rye and wheat flour, which allows it to rise better and results in a sweeter, earthier loaf with denser crumb. The added caraway when combined with the rye gives a very interesting twist to the flavour which makes it perfect for sandwiches (need some inspiration about fillings? Read on.).

What makes it special?

Rye is a close relative of wheat and barley. It has a deep, rich taste and is packed with vitamins and nutrients. Rye became a staple food in Europe during the Middle Ages, where it was cultivated in Central and Eastern Europe and was used to produce both bread and alcohol. Rye grows better in poor soils and cold temperatures compared to other cereal grains, surviving in snow cover that would otherwise kill wheat. For this loaf we use organic wholemeal rye from Hodmedod’s and combine it with our locally grown stoneground flour from Walk Mill.

Rye is loaded with key nutrients and fiber

Rye flour is rich in phosphorus, magnesium, zinc and iron. All essential for energy production and a healthy immune system. Rye bread generally has more fiber. Because rye bread is heavy and dense, it is possible to blend it with a high-protein flour to help it rise better. Often the rye bread and rye sourdough that you find in shops and bakeries has been blended with other flours in order to give it a paler colour and a more substantial crust.

Keeps you fuller for longer

Compared with white bread, rye bread has a lower glycemic index, which means it causes a slower, more gradual increase in blood sugar. It is also made through long fermentation which results in better digestability!

How to eat it?